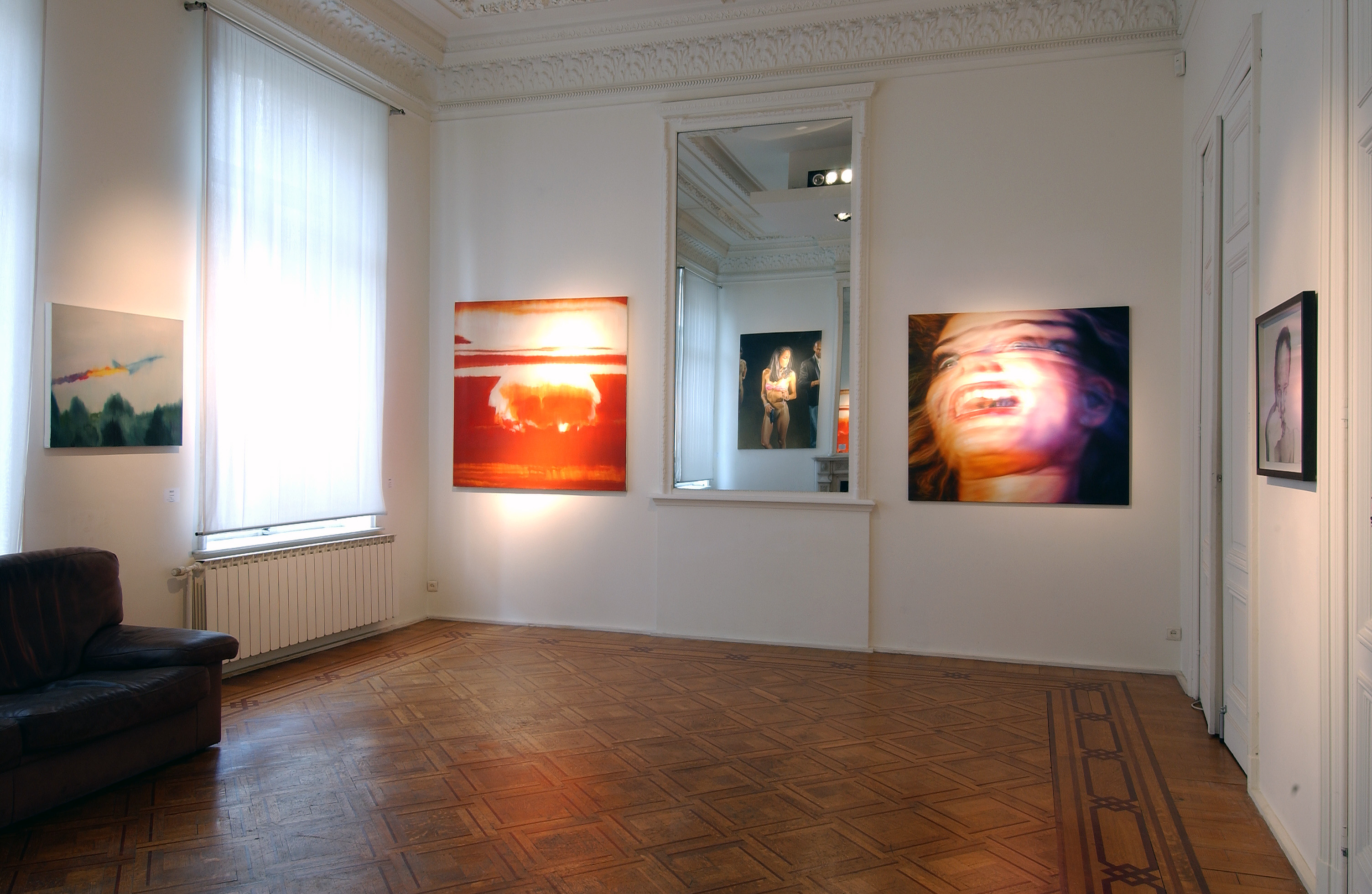 The title of this new exhibition organised by Jérôme Jacobs at Aeroplastics refers directly to the fine arts system, probably not without a hint of irony. For what kind of “nature” is it? Not the idealised nature of academic painters, as witnessed by the work of Joy Garnett (USA): the explosion of the Concorde in flight, the disintegration of the Challenger shuttle, tracer bullets in the Iraqi night, atomic explosions, hostage-taking and riot scenes, images from the news solidly anchored in the end of the 20th century and beginning of the 21st century. By the same token, Ronald Ophuis (NL) continues his work on the Srebrenica massacres, abandoning, however, the extreme nature of his evocations of the death camps to examine in depth a reflection based on suggestion – without however turning his back completely on an evocation of the macabre. The work of young Mathieu (B) (this is his first gallery exhibition) is also inspired by news photos which he touches up and covers, using the unusual support of oilcloths. Jan De Lauré (B), for whom this is also the first exhibition, confirms this decided trend of re-examining hyper-reality. While he practises a very similar technique, Terry Rodgers (USA) does not get his inspiration from the news or from the street, but in the glamorous world of the jet set, where partner-swapping, the cult of the body and boredom seem to go hand in hand, as can be seen from his colour-saturated paintings. While the beauty queens painted by Michael Van den Besselaar (NL) are aesthetic stereotypes, they seem to be placed strangely outside time. He also uses images from TV in a series of female portraits which underline the abundance of contrived devices inherent to any televised performance. David Nicholson (CAN) uses photographs, often personal ones, which he quite often touches up for the sake of the composition: look at the two children playing with a skull, and the sheep’s carcass, photographed in a back yard in North Africa, which takes on a quasi-heroic allure. On the other hand, the small paintings by Amanda Besl (USA) evoke snapshots, details caught furtively and reworked in an Expressionist style, without losing any of the – often sham – candour of her teenage models. Marianna Gartner (CAN) prefers images from the beginning of the last century to this contemporary photography. Her portraits of children posing before a background with their favourite toys are reworked to confer either a humorous or a sinister atmosphere. Contrasting with these orchestrated settings is the uncontrolled expression of Anya Janssen (NL), and the derision of the portraits and self-portraits of Colin Cook (USA). While the convoluted compositions of Eric White (USA) still have a direct albeit rather tenuous relationship with the reproduction of reality, Léopold Rabus (CH) confesses that he tries “to illustrate the precise moment when the spirit leaves the human body, voluntarily or involuntarily”. Similarly, with a complete confusion of genres, the erotic-mysticism of Frans Franciscus (NL) is inspired by Memling, Van Eyck and Pontormo, as well as by fashion photos. The approach by Elizabeth Huey (USA) appears to be dictated by the same type of research, but in a much lighter vein. The simple image suggesting thick matter in the paintings of Stephan Balleux (B) contrasts with the evanescent wash-paint of Charley Case (B), while the compositions of Thierry Feuz (CH) evoke a fantastic plant world observed through a microscope. Lastly, while Gauthier Hubert (B) casts an ironic eye on amateur painters, Jacques Lizène (B) is indeed the only one who can say that his painting “is literally crap!”.